Once again I’ve turned my attention to my cluttered inbox. Last year I attacked my inbox and had fairly good success, but it was more like sweeping dirt under a carpet in that I really just organized a lot of messages out of my inbox and into folders. Now I’m looking through those folders as well as my inbox and deleting with an iron fist. Its a nice and liberating feeling, but one which I could see going to far. At times I’m tempted to “select all” and “delete”.

I figure I’ll keep messages that mention dates of presentations, conferences and meetings (important ones) for the time being, since I’ve recently been working on updating my resume. After I extract all the important information from them I’ll be happy to let them go.

OK, my inbox has nothing in it.

I decided to customize the toolbar. [I’m using Apple’s Mail application] I removed most of the buttons I rarely if ever use (does anyone go up to the tool bar to click “delete” instead of using the keyboard delete button?) and rearranged the ones I do use. One I added that I wasn’t very familiar with is the “mailboxes” option, which toggles the mailbox sidebar. I figure since there’s no clutter in the inbox I might as well minimize everything and leave it as a big blank space.
Figuring I’ll keep the inbox empty I also removed the column which lists “Date Received” – this one could be dangerous, but I’ll try it out for awhile. 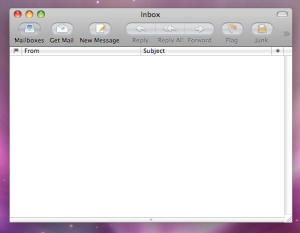 I’m at home now, while waiting to go play darts I’ve been cleaning up one of my Gmail accounts. Deleting in bulk, newsletters, automatic reminders and various old e-mails. Unsubscribed from a list or two.

20 messages in my inbox this morning, which seems low. Two factors to why I don’t have over 50 may be that I unsubscribed to several e-mail subscriptions and it was Easter weekend. Either way 20 e-mails don’t seem so daunting.

Generally I start at the oldest e-mail and work towards the newest, however today while getting a coffee I was pondering the most efficient way to get through e-mail. I figure I’ll start with deleting any e-mail that I don’t have to read, respond to or archive, then move on to e-mails to archive and finally attack the ones which need responses.

[less than a minute later]

Deleted 16 messages, and realized there was another list I could unsubscribe from.

Realized the three messages I was about to archive reside on different servers and so deleted them also.

The final e-mail, which I assumed required a response was pure information to be dealt with later. Archived.

Then I noticed that 11 messages followed recently created “rules” and marched themselves into a side folder for dealing with when I have time. I scanned through them and deleted them.

Here are a couple links about zeroing out your inbox: