I had an incredible time and wanted to share some accounts of various activities and highlights.
Before I begin I have to mention that prior to the conference I had been nominated and elected to the VRA’s Executive Board, as Public Relations and Communications Officer. So this conference was unlike any I had been to in the past, more meetings, responsibilities and business.
I opted to take an Amtrak to Albuquerque, and bring my bicycle with me. I packed a huge frame-pack Saturday night and rode to the Metrolink Sunday morning to get to downtown L.A. for CicLAvia… 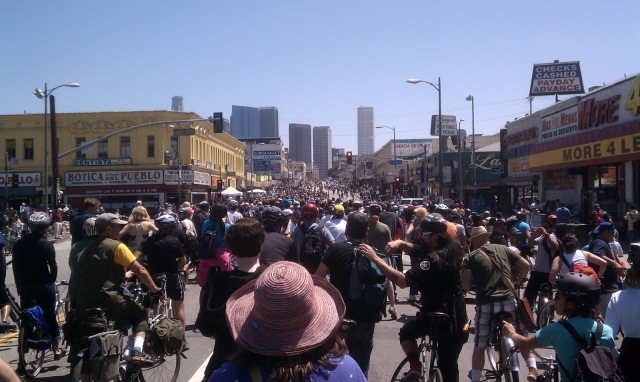 I had signed up for a two hour shift as Route Angel in the afternoon (1:30 -3:30pm) – which is basically riding a section of the route, helping fix people’s flat tires, chair problems, clearing debris, etc. Throughout the day I rode over 30 miles. After CicLAvia I stopped for some food and then back to Union Station where I boxed up my bike and hopped on the Southwest Chief headed for Albuquerque. The train ride was 16 hours and I arrived the next morning.
MONDAY

I woke up around 7am on the train, the sun was up and we were in some unknown part of the southwest. I took my laptop up to the observation car, thinking I could continue refining the talk I was going to give on visualization.

But the scenery was amazing and instead of working on a presentation I found myself mesmerized by the beautiful vistas. 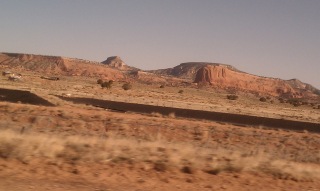 Once in Albuquerque I unboxed my bike and rode to the Hotel Albuquerque.

What should’ve been about a two mile ride turned into a six mile ride with many wrong turns, eventually riding along the Paseo del Bosque Trail, which I would come to love.
Once checked in I asked at the front desk about cycling, bike routes, and such and was pointed to a nearby bike shop, Routes, that had maps of the area, bike lanes, trails, etc.
I ended up getting a bicycling map of the region and buying a t-shirt.
After that it was time for some green chili enchiladas and margaritas. I ran into colleagues back at the hotel who were headed out for dinner, so I joined them and had a salad, since I was already stuffed.
TUESDAY
The next morning there were board meetings at 7:30am, so I woke up around 6am to get a bike ride in along the Rio Grande. The sky was light but the sun had not yet peaked over the mountains and when it did I had to stop and admire it. 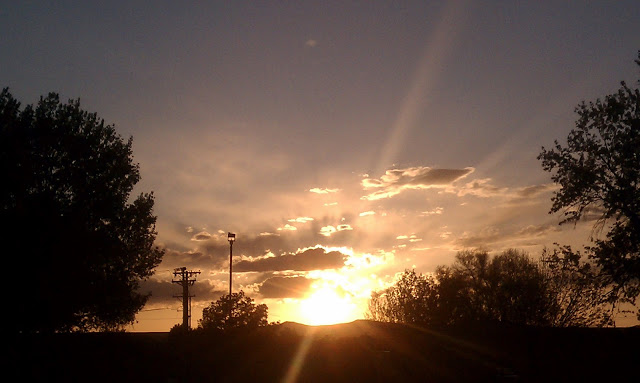 It was a gorgeous sunrise. 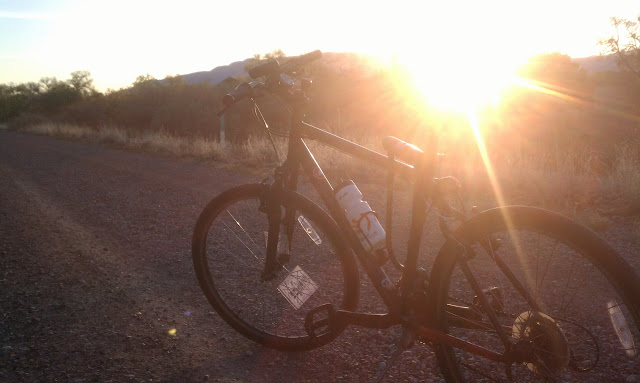 After that it was back to the hotel, shower & change and into the board meetings. After all the meetings were done we cabbed it to a restaurant (forgot the name) for dinner.
WEDNESDAY
I woke up and jumped on my bike before 8am and rode to downtown Albuquerque looking for cuff links, as I had a French-cuffed shirt but forgot to bring cuff links. Downtown was quiet and nothing really opened until 9am so I rode around some more until I could do some shopping.
The only cuff links I found were $75.00 and up, so I decided to just wear that shirt with the sleeves rolled up.
Back at the hotel I attended the Publications Programming Group meeting.
As an incoming board member, I attended a Student Members and Emerging Professionals lunch and got to meet several new members and hear about their work.
After that was a talk by Todd Carter, CEO & co-Founder of Tagasauris.

Then there was the Welcome Reception: What’s Your Story? Where members were encouraged to get up and talk a bit about what they’re doing, interesting projects or anything. I gave a brief presentation on Endurance Cycling and Digital Preservation – the harmonious interactions between humans and machines.

After that I attended the Publishing Advisory Group meeting, and then onto the Two Fools Tavern, Tractor Brewing Co., and some other places.
THURSDAY
I woke up and headed to the New Members & First Time Attendees breakfast and at 9am was the Engaging New Technologies session, where I presented a talk on visualization.
VRA 2012, Engaging New Technologies, Visualization
View more presentations from Visual Resources Association

My other colleagues in the session presented on:
video
screens
& productivity.

This was followed by the Awards Luncheon, where recipients of the Association’s major honors and awards were announced, amidst an elegant luncheon.
After that I hit the Bosque Trail and rode about 16 miles.

Back to the hotel to shower & change before the VRA 30th Anniversary Fiesta, held at the amazing CasaEsencia  –

Hors d’oeuvres and a cash bar. After that some colleagues and I went to the Q Bar (which claims to be Albuquerque’s most upscale bar and nightclub) – shot pool for free with colleagues while sipping Don Julio.
FRIDAY
At 8:00am in suit & tie I attended the Annual Membership & Business Meeting, I was recognized and given a certificate of appreciation as outgoing Chair of the VRA’s Southern California Chapter, and was inducted into the executive board. I can not express the simple act of taking office adequately, close terms would be honor, enthusiasm, respect and terror. Time dissolved. 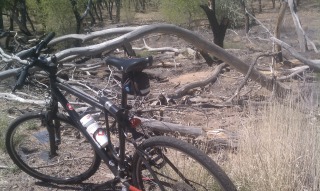 I went for a short, fast bike ride after that.
That evening was the vendor slam. Wine, cheese and mingling.
The Northern & Southern California Chapters met on the patio and discussed, amongst other things, another joint California Conference, tentatively planned for 2013?
Had dinner at St. ClairWinery & Bistro. The food was delicious, I believe I ordered a pasta with a white sauce, which ended up tasting more like an arrabbiata (which I happen to love).
Then there was Flamenco, more drinks and socializing.
SATURDAY
7:30am was the Leadership breakfast, where the leadership gathers to eat and discuss organizational matters. After that I rode my bike around Old Town Albuquerque and to a store for chap stick and water. 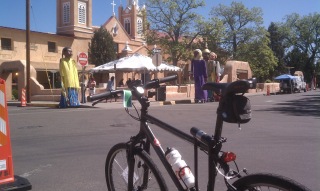 At noon I facilitated a “Birds of a Feather” networking lunch, focused on Social Media. Nice casual discussion about how people were using blogs, twitter, Facebook, RSS and the likes at their institutions.
The closing plenary was The Art of Perception given by Amy Herman – which was amazing. That signaled the end of the official conference and the hotel had died down quite a bit.
The board went bowling and out to eat that afternoon/evening. That evening I had to begin packing for my return trip.
SUNDAY
All packed, I checked out of the hotel & had them store my stuff while I attended the final board meetings (from 8:30 – 3pm). After the meetings I rode back to the Albuquerque Amtrak station, this time knowing exactly where I was going. During the train ride back I was exhausted but still energized, sat in the observation car gazing at the landscape and occasionally writing down post-conference follow up tasks.
When I arrived back in L.A. there were clouds and a slight bit of rain, it was an entirely unexpected and surreal experience.
I know I’m leaving quite a bit out, I may come back to this post & add other info but the whole week was was amazing and I often didn’t realize what day or time it was – there was that one evening by the hot tub… no clue which night that was. If you were in Albuquerque for the conference say Hi in the comments and point me to any photo’s, galleries, image sets there might be floating around the internet & feel free to connect with me on the various social networking sites we may both be on.