I received my Inbox invitation a few days ago and have been experimenting with it on and off.
Here are some of the basics I’ve figured out. 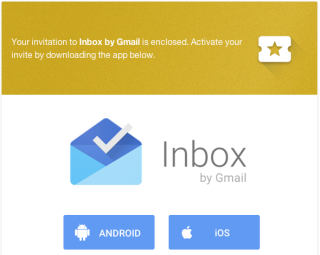 Inbox automatically bundles emails such as: Travel, Purchases, Finance, Social, Updates, Forums and Promos. (just like Gmail’s Priority Inbox)
If you think an unbundled message should be in a bundle: (on mobile) long-press to select the email (or emails) and then click the top-right option menu (three dots), to find your bundle choices to move the email(s) to, alternately you can add it to a label (unbundled) or create a new label (“+  Create new…”) at the bottom.

Swipe emails left to snooze or right to mark as done.

Snoozing an email sends it to “Snoozed” (which acts like archived mail in Gmail) for a designated amount of time. Options include:
Snooze until… Later today, Tomorrow, Next week or Someday (not sure when or how that returns to the inbox other than a manual “Move to…inbox” later)  You can also “Pick date & time” or “Pick place” (such as Home or Work: you can create new places by entering an address and naming the place) Seems like “snooze until at work” could come in handy on weekends.

Marking items in your inbox as “done” is also like archiving them in Gmail.  They are removed from your inbox (both Inbox and Gmail)…and safely stored elsewhere (you can find them in Gmail by looking at “All Mail” instead of only “Inbox.”
Looking at the “Done” list in Inbox will show you emails marked “done” as well as your Gmail archived messages. Got it?

Delete an email
Deleting an email from Inbox takes an extra step, long-press to select the email (or emails) and from the top-right option menu (three dots) choose “Move selected to…” Trash.

Pinning messages
From Inbox you have the option to “pin” an email, which keep them in Inbox. There’s a pin-toggle to show only pinned emails or inbox. Pinning isn’t the same as starring in Gmail and I don’t yet see a way to star a message in Inbox. If you mark a pinned message as done it removes its pin before archiving it.

“Sweep marks all unpinned items in this section done” Got that? So if you go to Inbox and hit the sweep button everything will be marked done (unless you pin things first).

You can set reminders attached to pinned emails or general reminders. This took me a second. From your Inbox you can click the red plus circle to compose an email or create a (general) reminder – which is somewhat intuitive with guessing emails, calls, texts and other things related to contacts and possibly locations. You can snooze your reminder by clicking the clock icon.

You can also add reminders to emails that you’ve pinned (but apparently not unpinned messages). Once you’ve pinned the email a “Remember to…” field shows up, allowing you to attach a reminder to the email. This might be my favorite function so far. I thought this might integrate with Gmail Tasks, but it doesn’t look like it does at this time?

On my Android phone I have three separate Google accounts that I switch between. You can switch accounts, add an account, manage accounts and get to your account settings from the top left menu button, click on your profile picture to access accounts, or if you have multiple accounts enabled just click on the account profile picture you want to switch to.

I really like Inbox so far, but I started with relatively few emails in my Gmail inbox (having waded through them a week or so before downloading and exploring Inbox). I don’t think Inbox would seem quite so handy or useful if you had hundreds or thousands of emails in your Gmail inbox, maybe I’m wrong.

Have you tried Google Inbox yet? Have any questions about it? What do you think?